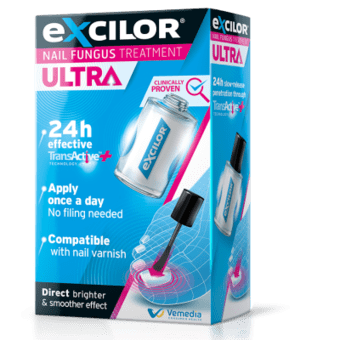 This clinically proven treatment delivers complete penetration for up to 24 hours. It has an immediate visual improvement after application and is compatible with nail varnish. The old layer can be peeled-off within seconds.
The nail grows back healthier and stronger so re-contamination has being prevented.

Fungal nail infections, what are they and how do you get rid of them?

Fungal nail infection (also known as onychomycosis) refers to an infection of the toe or finger nails by fungi (dermatophytes). The prevalence is estimated between 20-25% of the population. It is important to treat fungal nail infection as soon as possible because the infection is contagious.

In most cases fungal nail infections tend to look unhygienic. The infection usually starts at the rim of the nail, which changes colour to whitish-yellow, brown or green. The fungus grows under or into the nail causing the nail plate to thicken and crumble. Sometimes the nail becomes partially or completely detached, which may be painful. In some cases the nail will completely release from the toe or finger.

Fungi are therefore typically found in bathrooms, dressing rooms and showers within sports clubs, around swimming pools and saunas. In instances of athlete's foot (this is a different kind of fungus that can be found on top of the skin between the toes) there is a chance of contamination and this fungus can also lead to fungal nail infections.

How do you know you have a fungal nail infection?

It's not always easy to confirm, but there are a number of common symptoms that point it that direction:

For more advice, please visit us on Instagram @rightdose_uk.

Is this product suitable for use by diabetics?

Excilor® physically impedes the growth of infectious fungi by reducing the pH value of the nail (making it more acidic). This is not a pharmacological effect so there are no contraindications for diabetics. A combination of acidic substances penetrates the nail creating an environment that is hostile to dermatophytes (the fungi responsible for mycosis). The action is localised and targeted. Nonetheless it is recommended that diabetics with foot problems consult their doctor when starting to use Excilor nail fungus treatment (including ULTRA).

My nail has a fungal infection.How long will it take to eliminate the fungus?

As explained on the packaging the product should be applied to the affected nail(s) twice a day until the nail has grown back as a normal healthy nail. By then the patches and/or spots should have disappeared or the nail is no longer thickened or brittle.

A nail only grows about 1.5 mm a month. Excilor® not only makes the white/yellow patches on your nail disappear. More importantly – it gets rid of the actual micro-organisms (the dermatophytes or fungi) which live under your fingernail or toenail. It can take several weeks to make all the micro-organisms disappear. Meanwhile the healthy nail grows back and if you regularly trim the nail using nail clippers the dis-colouration will gradually vanish.

Is this product suitable for children?

No clinical data is available on whether Excilor can be used by children.

Is this product suitable when pregnant?

No clinical data is available on the use of this product during pregnancy.

My child put the Excilor® product in his/her mouth. What should I do?

The product's contents are not toxic but may irritate the mucous lining of the eyes, nose or mouth. The product cannot be opened so children cannot access the contents directly. Because Excilor® has a bitter taste your child is unlikely to swallow or ingest it deliberately. If the product comes into contact with the eyes or inside of the mouth, rinse them out using plenty of water.

The instructions advised me to “clean the nail and remove any traces of nail polish” before each application. Can I simply clean the nail with soap and water or should I always use nail polish remover?

Like all medicines, Excilor Ultra Nail Fungus Treatment - Extra Strong can cause side effects, however, this may be less likely.

Consult a doctor, if you are a diabetic or suffer from poor circulation.

If you get any side effects, talk to your doctor, our Rightdose pharmacists or nurse. This includes any possible side effects not listed in this leaflet.

You can help to make medicines safer by reporting any side-effects to the Yellow Card Scheme at www.mhra.gov.uk/yellowcard.

Excilor was specifically developed to treat fungal nail infections and is based on 3 principles:

Fungal nail infection (onychomycosis) is a progressive disease. If it is left untreated the infection spreads.

Initially you may only see white spots or patches on the nail. They only affect the cosmetic appearance of the nail and initially there is no pain.

If your nail is showing symptoms it is important to take immediate action as the fungus will gradually spread throughout the nail. If left untreated you will run the risk of the nail becoming brittle and a possibility that you may lose the nail. The infection can spread between fingernails and toenails and from one person to another.

For external use only.

Do not use the product after its expiry date.

Order within for guaranteed next day delivery options

Close
The variation selected is currently out of stock.
Item added to basket. Click here to view basket.
Please select a size from above to proceed.
There are NHS prescriptions in your basket. Please complete the order first or remove NHS prescriptions from the basket.
Sorry, we are unable to supply more than 1 of any item which falls under our prohibited list
Follow Us