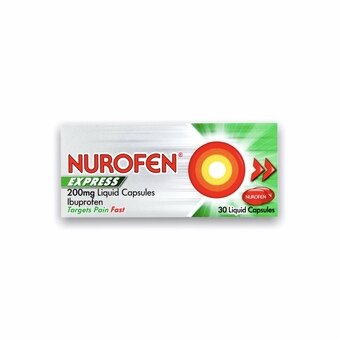 The active ingredient (which makes the medicine work)
is Ibuprofen. It belongs to a group of medicines known
as non-steroidal anti-inflammatory drugs (NSAIDs).
NSAIDs provide relief by changing the body’s response
to pain, swelling, and high temperature. This medicine
is used for the relief of:
• Headaches and migraine pain
• Dental pain and neuralgia
• Period pain
• Rheumatic, muscular and back pain
• Feverishness and symptoms of cold and flu.

STOP TAKING the medicine and seek immediate
medical help if you develop:
• signs of intestinal bleeding such as: bright red
faeces (stools/motions), black tarry stools, vomiting
blood or dark particles that look like coffee grounds. • signs of serious allergic reaction such as:
- difficulties in breathing or unexplained wheezing
- dizziness or faster heartbeat,
- severe skin reaction (rashes, itchiness, peeling,
flaking or blistering)
- swelling of your face or throat
• signs of blood disorder resulting in unexplained or
unusual bruising or bleeding, fever, sore throat, mouth
ulcers, flu-like symptoms and severe exhaustion
• signs of liver problems such as stomach pain,
jaundice (yellowing of skin and whites of the eyes)
or passing dark brown urine
• a severe skin reaction known as DRESS syndrome
can occur. Symptoms of DRESS include: skin rash,
fever, swelling of lymph nodes and an increase of
eosinophils (a type of white blood cells)

Before taking any medication, it is important to read the Patient Information Leaflet. You can find information leaflets for your medicines by typing them into the search bar at medicines.org, or by contacting us.

Do not take Nurofen Cold & Flu if you:
• are allergic to ibuprofen, pseudoephedrine or any of the
other ingredients of this medicine (listed in section 6) or to
aspirin or other non-steroidal anti-inflammatory drugs
• have had a worsening of asthma, skin rash, itchy runny
nose or facial swelling when previously taking aspirin or
similar medicines
• have (or have had two or more episodes of) a stomach
ulcer, perforation or bleeding
• have had gastrointestinal bleeding or perforation when
previously taking (non-steroidal anti-inflammatory drugs)
(NSAIDs).
• are taking other NSAID painkillers or more than 75mg
aspirin a day
• have severe heart disease or very high blood pressure
• have severe heart, kidney or liver problems
• are in the last 3 months of pregnancy.
• are under 12 years of age.
• are taking Monoamine Oxidase Inhibitors (for depression
and known as MAOIs) or have taken these in the last
14 days.
Check with your pharmacist or doctor before taking
Nurofen Cold & Flu if you:
• have asthma
• have Systemic Lupus Erythematosus (SLE)- an illness
affecting the immune system causing joint pain, skin
changes and other problems
• have liver or kidney problems, especially in dehydrated
children and adolescents, as kidney problems can be
made worse
• have high cholesterol or have previously had a heart
attack or a stroke
• have a history of gastrointestinal disease (such as
ulcerative colitis, Crohn’s disease)
• are a smoker.
• have an over-active thyroid
• are diabetic, have a phaeochromocytoma, glaucoma or
prostate problems
Taking other medicines
Nurofen Cold & Flu may affect or be affected by some other
medicines. For example:
• medicines that are anti-coagulants (i.e. thin blood/prevent
clotting e.g. aspirin/acetylsalicylic acid, warfarin,
ticlopidine) as their affects may be increased
• medicines that reduce high blood pressure (ACE-inhibitors
such as captopril, beta-blockers such as atenolol
medicines, angiotensin-II receptor antagonists such as
losartan) and diuretics as Nurofen Cold & Flu can reduce
the effects of these drugs.
• Corticosteroids, anti-platelet agents and selective serotonin
reuptake inhibitors (SSRIs) as there is an increased risk of
gastrointestinal bleeding
• Cardiac glycosides used to stimulate the heart.
• medicines for depression (lithium, selective serotonin
uptake inhibitors may affect or be affected by treatment
with pseudoephedrine.
• Methotrexate as Nurofen Cold & Flu can increase plasma
levels of these drugs.
• Ciclosporin & tacrolimus as there is an increased risk of
kidney problems
• This product should not be taken within 8-12 days of taking
Mifepristone (for termination of pregnancy)
• Zidovudine (for HIV treatment).
• Quinolone antibiotics
• When using Monoamine oxidase inhibitors (MAOIs)
(e.g. moclobemide) and/or Reversible inhibitors of
monoamine oxidase A (RIMAs), or within 14 days of
stopping treatment with these medicines.
• Ergot alkaloids (ergotamine & methysergide)
• Other sympathomimetic agents such as decongestants,
amphetamine-like psychostimulants and appetite
suppressants, as their effect may be increased by the
pseudoephedrine contained in this medicine.
• Oxytocin as there is a risk of increase in blood pressure.
• Anticholinergics as they can affect the way that
pseudoephedrine works

Order within for guaranteed next day delivery options

Close
The variation selected is currently out of stock.
Item added to basket. Click here to view basket.
Please select a size from above to proceed.
There are NHS prescriptions in your basket. Please complete the order first or remove NHS prescriptions from the basket.
Sorry, we are unable to supply more than 1 of any item which falls under our prohibited list
Follow Us